Since a really long time, search engine results pages have had text ads displayed in the right sidebar. But all that is about to change with Google rolling a new updated design for their search result pages or in short, SERP.

According to the new update, up to four paid ads would be shown above the organic results and the text ads which earlier used to appear on the right side of the desktop search results would be completely removed. It is worth noting that Google has not done away with the knowledge panel on the sidebar. 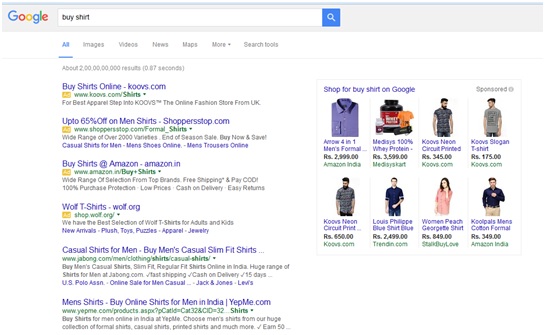 One of the major drivers behind the update was an eye-mapping study which was conducted last year. According to the report, people have transitioned from viewing the SERPs in an “F” pattern to quickly vertical scanning the page left down, mostly ignoring the ads on the right side.

Another rationale behind the change was Google wanted to modernize its desktop research results page to match the mobile results page, wherein the right column of ads was not visible.

While some came out as clear winners due to this change, others had to bear the brunt.

PPC marketers and ad position 3 and PLAs came out as clear winners, ad position 5-11 and organic search paid the price.

Let us look at some benefits and drawbacks of this update.

One of the key objectives behind the update was to provide the searchers with relevant and refined results.

Historical data shows that a major chunk of ad clicks come from top ads and only a few from side and bottom ads. Also, since the update was rolled out, ads at 3rd position and product listing ads (PLAs) have received the biggest boost in terms of click-through rates and a larger share of paid clicks from the SERP.

Ads now appear more ‘native’ which might prove as being beneficial for advertisers because many searchers can’t differentiate between paid and organic results.

Now all ads can use sitelink extensions,call-out extensions, location extensions to name a few, an option which was previously  available only to top-of-page ads.

Organic search took a major hit because of the new update. With upto four paid ads showing above it, organic search has now been pushed down. Paid position 4 is now the new organic position 1. So for SERPs with highly commercial queries, some of the top organic results will no longer be above the fold on many tablets and desktops. Though this sounds like a bad news, things are not as bad as seems. For most queries top queries still appear above the fold and for the most part, searchers are willing to scroll. Companies who actively work on their SEO on a daily basis are more likely to be the least hit.

After the update was released, for the ads in positions 5 to 11, the total share of all paid clicks and impression shares declined significantly.

Ad in positions 8 to 11 were the worst affected by the update, since there were kicked off from the SERP in the new layout. Even ads in the positions 5 to 7 faced lesser reach.

Though this might come across a big change, you need not panic. There are certainly ways to overcome the shortcomings. Just keep monitoring your campaigns and modifying your accounts accordingly. If you want us to help you with your campaigns and drive more traffic to your website – Get in touch!